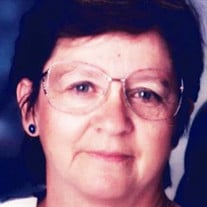 PRISCILLA L. KJORNES Priscilla L. Kjornes, age 75, of Richland Center/Holmen, WI passed away Tuesday, December 27, at Milestone Assisted Living in Hillsboro, WI. She was born on August 3, 1941 in Beloit, WI to George LeRoy and Henrietta Charlotte (Farmer) Lamb. Priscilla worked as a waitress and a machinist for many years for Black and Decker before retiring. She enjoyed traveling, gardening, her flowers, humming birds and especially her grandchildren. Priscilla and Edwin were married on Aug. 18, 1979. During their 37 year marriage, they traveled from east to west coast, north to south, via planes, trains, and automobiles. Survivors include her husband, Edwin of Holmen, WI, children: Allen (Jackie) Gates of Beloit, WI and Kathy Chyzy of Edmond, OK; stepchildren: Tari(Dennis) Whitehead of Red Bluff, CA; Tina(fiancé Rick Durst) Kjornes of Holmen, WI; Keith(Marti) Kjornes of South Beloit, WI and Claudia(Lloyd) Twedt of Canton, SD and many loving grandchildren and great grandchildren; a brother, Clifford(Louise) Lamb, and sister, Dianna(Bruce) Farley; many other relatives and friends and her beloved dog, Sadie. She is preceded in death by her parents; baby son Timothy Gates; brother Edgar (Joyce) Lamb; sisters, Lorraine(Arthur) Drake and Linda Lamb and stepson Steve Kjornes. Memorial Services will be held at 11 a.m. on Friday, January 20, 2017 at the Milton Lawns Memorial Park in Janesville, WI. Lunch will be served afterwards at the Moose Lodge, 2701 W. Rockport Road in Janesville, WI. A very special thank you goes to Jim (Taz) and Lisa McGlyn and their family for all the help and support given to Priscilla and Ed over the years. They couldn’t have done it without you! Mom, we will never forget the homemade pizza parties and egg hunts with our kids, Easter ham and Christmas’s at your house. Thank you for the memories in our hearts forever! Love and miss you.

The family of Priscilla L. Kjornes created this Life Tributes page to make it easy to share your memories.

Send flowers to the Kjornes family.