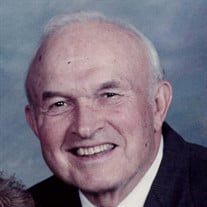 Ray Dempsey Sailsbery, 90, of Richland Center, WI passed away September 24, 2020 at home on his farm with his children and Shirley, his wife of 70 years, at his side. He was a devoted father and grandfather. He firmly held his children and grandchildren to high expectations, NEVER hesitated to share his opinion, and loved deeply. Ray was born on April 14, 1930 in Decatur, IL, to Roy and Edith (Silveus) Sailsbery. He was the youngest of five children. He attended Ithaca and Richland Center High Schools, where he boxed and played football, basketball, and baseball. Ray enjoyed reminiscing about his school days, and all the games, adventures, and outstanding plays he was a part of. After graduating from Richland Center High School, Ray married his high school homecoming queen Shirley Kinyon on November 19,1949 in Decatur, IL. Together they built a loving home, anchored on faith in God and devotion to family, and raised three children, Stephen, Curtis, and Shona. Ray had various early careers, working as a Decatur delivery driver for Schudel Bros Laundry and Dry Cleaning, farming on Kinyon and Liscum farms in Richland County, and delivering for Elm Grove Dairies. Though Ray is most known and admired for his many years of service as a Wisconsin State Trooper. In 1963, Ray traveled to Madison to complete the test to become a State Dairy Inspector. As was his usual habit, he arrived markedly early for the scheduled Dairy Inspector exam. He learned he also had time to take the State Patrol exam while he waited. Thus began his 22 year career as a Wisconsin State Trooper. You may have encountered Trooper Sailsbery on the highways of Richland County. He was a fair, respected officer in the community, always willing to answer a call and help someone in need. Ray practiced his duties with humility and respect; if he stopped you and issued you a ticket, it is highly likely you deserved it. He was a natural protector and defender, of his wife, his faith, his family, and anyone at risk. On occasion his family woke up to an unexpected guest brought home during the night who needed a warm place to recover or await a car repair. He impressed upon his children the importance of caring for the community and standing up against injustice and prejudice. After retirement Ray enjoyed hours spent woodworking and remodeling the cottage on the farm. His bookshelves, hall trees, and other wood crafts sold out quickly at the Something Special store in Richland Center. In addition to his passion for woodworking, Ray was a dedicated fan of the Packers and Badgers, and an avid Ithaca sports fan. He attended Ithaca home games as long as he was physically able. Our family is so grateful to the Ithaca fans who saved him a spot, offered him a chair, and made sure he made it safely to his vehicle. Ray was a lifelong member of the Free Methodist church, volunteering many hours on the building of the church, singing in the choir, teaching with Shirley, serving on committees, sponsoring a child’s way to Sky Lodge Christian camp, and camping with family at Free Methodist family camps. In lieu of flowers, donations can be made to the family camp he held dearly, Sky Lodge Christian Camp in Montello. Ray is survived by his wife Shirley, his children Stephen (Kim) Sailsbery, Curtis (Ardyth) Sailsbery, and Shona (Derin) Fowler; 13 grandchildren, Tera, Ben, Tyler, Brian, Sarah, Ben, Bethany, Jessica, Kinsey, Adam, Nicole, Trisha, Shaun; 17 great-grandchildren Corvin, James, Cyrenna, Sophie, Harper, Cora, Calista, Brian, Tatianna, Ariana, Prince, Elijah, Josiah, Spencer, Lauren, Ashton, and Stiles; and nieces and nephews. Ray is preceded in death by his parents, and his siblings Eleanor (Clyde) Gray, Eloise (Dale) Wheeler, Hazel (Art) Hullinger, and Roy (Eloise) Sailsbery. In an effort to protect the health and well being of family members, a private interment for the family will be held on November 28, 2020. In lieu of flowers, donations can be made in Ray’s memory to Sky Lodge Christian Camp at skylodge.org or by mail to: Sky Lodge Christian Camp, N4855 County Road Y, Montello, WI 53949. Thank you from the Sailsbery family to the SSM Home Health Care team, Penny and Jody, to caregivers Terri and Lori, and to the Clary Memorial Funeral home for all their care and kindness during this time. wwww.clarymemorialfuneralhome.com .

Ray Dempsey Sailsbery, 90, of Richland Center, WI passed away September 24, 2020 at home on his farm with his children and Shirley, his wife of 70 years, at his side. He was a devoted father and grandfather. He firmly held his children and... View Obituary & Service Information

The family of Ray Dempsey Sailsbery created this Life Tributes page to make it easy to share your memories.

Send flowers to the Sailsbery family.