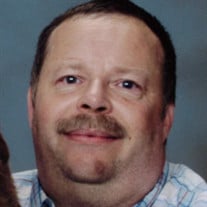 Ricky Dean Hobbs, age 61, of Sextonville died Saturday July 28, 2018, at home surrounded by his family. He was born on August 9, 1956, the son of George Jr. and Audrey (Persinger) Hobbs in Boscobel, WI. Rick grew up on the family farm in rural... View Obituary & Service Information

The family of Ricky Dean Hobbs created this Life Tributes page to make it easy to share your memories.

Send flowers to the Hobbs family.