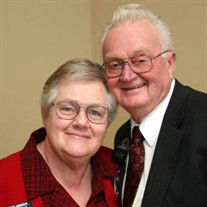 ROBERT T ANDERSON OBITUARY Robert T Anderson was born on June 1, 1927 in Chippewa Falls, Wisconsin, the son of Lena Petrina Beaverson and Ernest Hugh Henderson. He passed away peacefully on August 17, 2020. In Richland Center, Wisconsin. On May 16, 1949 he married Frances Mae Schultze in Helena, Montana. From this union four children were born — Twins Roland & Rodney, Loren and Kristine. Frances & Robert later divorced. On August 7, 1970, Robert married Judith Kay Burlingham in the Salt Lake City LDS temple. This marriage added Judy’s son, John, to their family. Together they had two children, Ben Corianton and Aaron. As a result of a tragic accident, Robert and Judy welcomed four more children into their home, Michael, Roberta, Roger and Pam. Robert was a Naval World War II veteran and worked at various jobs throughout his life. He loved to farm, hunt and was known for his desire to tinker and fix things. Robert loved to read and had a strong testimony of the Gospel of Jesus Christ. He and Judy served an LDS mission to Temple Square in Salt Lake City. Robert loved to tease and had a great sense of humor. Robert is proceeded in death by his son, Ben Corianton, Michael Doering (Julia) and Roberta Doering. He is survived by his wife, Judith and children, Roland (Nancy), Rodney (Mariann), Loren (Kathy), Kristine, John Wardenburg (Pam), Roger Doering, Pamela Cook (Greg) and Aaron (Jandy). There will be a graveside service on Wednesday, August 19, 2020 at 11:00am at the Willow Valley Cemetery in Ithaca Township, Richland County, Wisconsin. The Clary Memorial Funeral Home in Richland Center, WI assisted the family with arrangements. www.clarymemorialfuneralhome.com The family would like to thank the loving caregivers of Pine Valley Community Village for the love and care of Robert and Judy over the past few years. In lieu of flowers, we would ask that contributions be made in Robert’s name to the Pine Valley Foundation, 25951 Circle View Drive, Richland Center, WI 53581. .

The family of Robert T. Anderson created this Life Tributes page to make it easy to share your memories.