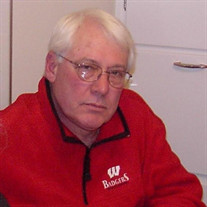 Carl Shoemaker Robert “Carl” Shoemaker, 80, of Richland Center, Wisconsin died on October 31, 2021, at Agrace HospiceCare, Janesville, Wisconsin. Carl was born on October 22, 1941 in Princeton, Indiana, the son of Carl and Betty (Brownley) Shoemaker. Carl graduated from Niles High School, Skokie, Illinois; and from Luther College, Wahoo, Nebraska. Carl married his high school sweetheart, Linda Lantz on October 15, 1959. They had two children, a son Robert Carl “Bob” Shoemaker, and a daughter Victoria Lynn Shoemaker. Carl worked in sales most of his adult life. He sold for Norcross Greeting Cards in Chicago before moving his family to Richland Center, Wisconsin, where he sold for multiple entities including Dodgeland Harvestore and National Chemsearch. During his career, Carl always excelled and earned many awards and accolades for his personal sales as well as the sales teams he trained and built along the way. He thoroughly enjoyed his many customers and colleagues, building relationships and creating many friendships along the way. Carl took great pride in his work, his family and his home. In his free time, he enjoyed working on his hobby farm, refinishing antique furniture, watching the Chicago Bears, and spending summers on the lake in northern Wisconsin. Carl is survived by his wife of 62 years, Linda; son, Bob (Lauren) Shoemaker of St. Peter, Minnesota; daughter, Victoria (Keith) Ruetten of Richland Center, Wisconsin. Five grandchildren, Aaron Shoemaker (special friend Ally), of Chicago, Illinois; Kendra Shoemaker of Newport Beach, California; Emma Ruetten, Abby Ruetten, and Eric Ruetten, all of Richland Center, Wisconsin. He is also survived by his brother-in-law, Kenneth (Barbara) Lantz of Round Lake, Illinois; nieces and cousins. He was preceded in death by his parents. A visitation will be held on Sunday, November 14, 2021 from Noon to 3:00 PM at the Clary Memorial Funeral Home in Richland Center. A funeral service for his family will be held at a later time. In lieu of flowers memorials can be given to a charity of your choice.

The family of Robert "Carl" Carl Shoemaker created this Life Tributes page to make it easy to share your memories.

Send flowers to the Shoemaker family.