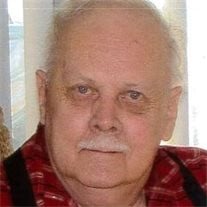 Robert "Bob" Earl Griffith, age 81, of Richland Center passed away Tuesday November 20, 2012 at the Richland Hospital. Robert was born on August 24, 1931 in Milwaukee, Wisconsin the son of Archie & Anna (Hagen) Griffith. In his youth Bob joined the U.S. Army, and then started his training in Fort Leonard Wood, MS. He was stationed in Long Island, New York and he also served in the Korean War. Throughout his service he was awarded four years of good conduct, Artillery Battery and a State Protection Act Metal. Robert married his soul mate Thelma L. Steine on November 21, 1953 in Milwaukee, Wisconsin. Robert and Thelma shared sixty years of marriage together. Robert supported his family by working two jobs most of his life. His main job was with the Continental Baking Corporation, where he broke the record of safe driving over thirty years. His side job in which he enjoyed was selling pools for Allie Pools in Milwaukee, Wisconsin. Robert put everyone before himself. He was a great role model to many. Robert also had the kindest, most generous heart. He donated to many organizations. He loved to make people laugh with his jokes and stories, which will be greatly missed by family and friends. He always gave wonderful advice, was easy to talk to and very strong willed. He never complained and was a very happy man. He enjoyed hunting & fishing in his early years and in his later years he enjoyed antiques and going to auctions with his brother & best friend Archie Griffith. Robert Griffith came from a huge family with seven siblings. He is survived by his wife Thelma Griffith of Richland Center, brothers Archie Griffith, Gary Griffith of Wisconsin Rapids, and a sister Margaret Griffith of Richland Center. Also all of his children Renee Ann Griffith his youngest who's been taking wonderful care of him for many years, Robert Griffith of Lake Geneva, WI, Karen Gioelli of Whitewater, WI, Sharon Hill of Hartland, WI; Six grandchildren and Five great grandchildren. He was preceded in death by his parents Archie & Anna Griffith; a sister Rosie Zienkiewize; 3 brothers Gorden, Arden & Vern Griffith. Robert's wishes were to have no memorial service. If you wish to send your condolences you may send them to 111 Pine St., Richland Center, WI 53581. The CLARY MEMORIAL FUNERAL HOME & CREMATION SERVICE assisted the family with arrangements. www.clarymemorialfuneralhome.com

The family of Robert "Bob" Griffith created this Life Tributes page to make it easy to share your memories.

Send flowers to the Griffith family.