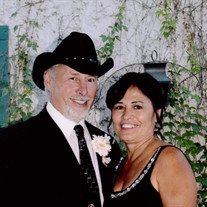 Robert “Bob” & Josie Dobbs, age 67 & 68, died suddenly from a motorcycle accident in Tomahawk, WI on Friday, September 18, 2015. They were married September 18, 1993 at Dalewood Retreat near Sextonville. Robert James (Bob) Dobbs was born on May 31, 1948 to Robert and Juanita (Coleman) Dobbs. Bob graduated from Ithaca High School in 1966 and married his high school sweetheart Cheryl Olson in 1967. Together they had three children: Tori, Brooke, and Tyann. Later in life, Bob married Josie and together they had a daughter, Bobbie Jo. Over the years Bob had many occupations but was a true entrepreneur at heart. In his early years, Bob worked with his father at Ryan Construction. For many years he ran his own over-the-road trucking company called Dobbs’ DD Express. In the early 1990’s, Bob and his son Brooke and friend Marc Schwarting started BB& M Landscaping (later known as Richland Landscaping) which has been in operation until the time of his death. Bob had always wanted to have his own bar and most recently he and Josie were the owners of the Steel Horse Saloon in Gotham. With their easy and welcoming personalities, they quickly built a great business and the Steel Horse became a very popular gathering spot. Bob never met a stranger and was truly known to be a friend to anyone and everyone. There was never a moment when laughter was absent when Bob was around. He had a goofy sense of humor and was always sporting a big, beautiful smile. Bob had a huge heart and went out of his way regularly to help anyone in need without ever expecting anything in return. He was always willing to give anyone a second chance when others would not. Bob’s greatest love was his family and he enjoyed organizing family events including the annual Dobbs’ campout, getting together for Sunday dinners, or going for a motorcycle ride with his kids. He lived for and made the most of every day of his life. Josephine (Josie) Ann Dobbs was born on June 25, 1947 to Albert and Constance Garcia, the eldest of seven children. Josie graduated from Richland Center High School in 1965 and for a period of time she attended teacher’s college in Richland Center. Eventually she moved to Waukesha where she worked for several years at La Casa de Esperanza. When Josie returned to the Richland Center area she worked as a waitress at the White House Supper Club and then began working for U.M.O.S., where she was employed for over 20 years. Josie was a beautiful person, inside and out. She was very social and outgoing and loved to visit with friends and family. She was a very giving person and often assisted families in need. She had a good sense of humor and loved to laugh. Josie had many interests and was involved in softball and ice-skating in her younger years and most recently enjoyed bowling on a biweekly league. Josie’s pride and joy were her children (Cory, Shileen, and Bobbie Jo), step-children, and 12 grandchildren and she was very often seen sharing photos and stories about them to her friends and customers. Bob and Josie were very deeply in love, true soulmates, and it was rare to see one without the other. They worked together at the landscaping business and together shared their love of people by opening the Steel Horse. Bob was a constant source of laughter for Josie and she was his right-hand. They lived life to the fullest and it was often mentioned that they had more energy than most twenty-year-olds. They were very spontaneous and often took last minute trips to destinations near and far. Bob and Josie were avid motorcycle riders and went riding every chance they got with many friends and family. They were together for over thirty years and together raised six children that were the center of their lives. They will both be very dearly missed by all. Survivors include 5 children, Tori Dobbs (Nick Wilson) of Richland Center, Brooke Dobbs (Shelly Reyzek) of Richland Center, Tyann (Kurt) Schwarting of Madison, Cory (Carmen) Kurtz of Marshall, WI, Bobbie Jo (Scott Wilson) Dobbs of Los Angeles, California; 12 grandchildren, Jaron Wilson, Tehya Dobbs, Liam Schwarting, Emma Schwarting, Taryn Schwarting, Avery Kurtz, Spencer Kurtz, Ryder Kurtz, Mercedes Dobbs, Dakota Juno, Quinn Juno, Tatum Reyzek; Bob’s 6 brothers & sisters, Dale Dobbs of Sextonville, Linda Prechter of Green Bay, Barb Clary of Ithaca, Gary Dobbs of Sextonville, Michael Dobbs, of Madison, Terry (Becky) Dobbs of Burlington; Josie’s mother, Constance Garcia of Waukesha; Josie’s 6 brothers & sisters, Mary Lou (Vern) Long of Cottage Grove, Francis Garcia (Wayne Schwartz) of Cottage Grove, Albert (Sandy) Garcia of Waukesha, Robert Garcia of Waukesha, Alex (Chris) Garcia of Waukesha, Steve (Wendy) Garcia of Whitefish Bay; many many nieces, nephews, aunts, uncles, other relatives and friends. Preceded in death by Bob’s parents; Josie’s father; daughter, Shileen Kurtz; Bob’s brother, Stanley Dobbs; brothers-in-law, Keith Prechter, Ron Clary. Funeral Services will be held on Saturday, September 26, 2015 at 1:00 PM at the Clary Memorial Funeral Home in Richland Center. Burial will be held in the Brown Church Cemetery with Pastor Larry Engel officiating. Visitation will be held on Friday, September 25, 2015 from 4:00 PM to 8:00 PM and also on Saturday from Noon until the time of service at 1:00 PM. In Lieu of Flowers, memorials can be made out to the family.

The family of Robert & Josie Dobbs created this Life Tributes page to make it easy to share your memories.