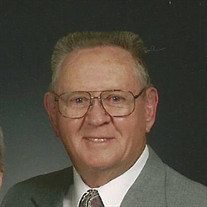 Roger Leron Barnes, 91, of Richland Center, Wisconsin, went to be with his Lord on May 16, 2016. Roger, the eldest son of Leron Myers Barnes and Gladys Geraldine (Jones), was born June 2, 1924 and graduated from Richland Center High School. In his younger years Roger loved pitching baseball and softball; and in his later years, often joked, “I’m waiting for a call from the Cubs to play ball.” In high school Roger was a trombonist and continued playing in both the Hub City and Richland Center City Bands. Throughout his life he was also a dairy farmer, an accomplished finished carpenter, mason, draftsman and salesman of custom homes. Roger retired in his 70s after 15 years working for Southwest Design, finding properties for development into low-income housing. In retirement he drove cars for the Jones Chevrolet and Fillback Ford Dealerships and pursued his true passion – fishing. He spent many happy hours repairing rods and reels that others thought unusable. He loved fishing and talking “fishing” with everyone. He always said, “There’s no bad fishing day, just bad catching days.” His popcorn and homemade ice cream will be missed by his children, grandchildren and great grandchildren. Roger was married to Ardella Brown on September 13, 1972. They were long-time members of Peace United Methodist Church. Roger was active in the church choir and on many committees. Left to cherish his memory are his wife of 43 years, Ardella (Brown) Barnes, his children by his first marriage to Doris FitzGerald; David (Cherry) Barnes and Jean (Daniel) Cole; and Ardella’s children, Jackie (John) McHale and Kathie (Daniel) Samborski; and two brothers, Lyall (Alta) Barnes and James Barnes and many grandchildren and great grandchildren. Roger was preceded in death by his parents, Leron and Gladys (Jones) Barnes; his first wife Doris and their two sons, Bruce and Alan, and his Sister-in-law, Janice (Unke) Barnes. A Celebration of Roger’s Life will be held on Friday, June 3, 2016 at 11:00 AM at the Clary Memorial Funeral Home in Richland Center. Friends and Family may attend visitation at the Clary Memorial Funeral Home on Thursday, June 2, 2016, from 4 – 7 PM and on Friday , June 3, from 10 AM until the time of services at 11:00 AM Memorials may be made to the Peace United Methodist Church Roof Replacement Fund or Mission Fund.

Roger Leron Barnes, 91, of Richland Center, Wisconsin, went to be with his Lord on May 16, 2016. Roger, the eldest son of Leron Myers Barnes and Gladys Geraldine (Jones), was born June 2, 1924 and graduated from Richland Center High School.... View Obituary & Service Information

The family of Roger Leron Barnes created this Life Tributes page to make it easy to share your memories.

Send flowers to the Barnes family.