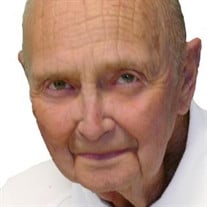 Rolland Lee Sherriff, WWII veteran, recreational pilot, mechanic, carpenter, self-taught builder and craftsman, loving husband and devoted father, passed away peacefully holding his daughter’s hand on June 28, 2018 at Schmitt Woodland Hills Retirement Community in Richland Center, Wisconsin. He was 94. Mr. Sherriff was born on a farm in Ft. Atkinson, Wisconsin on May 22, 1924. His mother, Ruth Jane Kyle Sherriff died in 1929. His father, Irving Sherriff, was a farmer, mechanic and boatbuilder who also piloted a WWI surplus Thomas Morse Scout around Jefferson County. After the death of his wife, Rolland’s father married June Chilsen and moved the family to Merrill, Wisconsin in 1930. Rolland attended high school there and also earned his pilot’s license. A skull fracture from a tobogganing accident prevented him from joining the Army Air Corp during WWII. He was drafted while waiting for it to heal. Because of his technical aptitude, Rolland was literally pulled out of the mud at basic training to participate in the Army Specialized Training Program (ASTP). However, with D-Day looming, his engineering studies were cut short and he became a replacement, scouting for his unit in the 2nd Infantry Division. He was wounded in France and awarded the Purple Heart. After the war, Mr. Sherriff began a career with the U.S. Postal Service in Merrill and remained an avid flyer exploring northern Wisconsin and Canada in an amphibious Republic Seabee. He married Shirley Leone Groth in 1951. They raised three children, Christopher, Steven and Susan and were members of St. John’s Lutheran Church. Rolland was always working on some project or some ‘thing’: remodeling the Sherriff home, maintaining his cars for the mail route, fixing up airplanes or a boat to haul up to Lake Superior. One Christmas, he even built a scaled down airplane his kids could sit in and push around the yard. The propeller spun. All control surfaces worked and it had real surplus aircraft instruments. When his kids came of age, it was quite a shock to learn the family was not wealthy. Their Dad just knew how to fix stuff up! Delivering mail 100 miles a day on a rural route during the Wisconsin winter and maintaining the 4 cylinder Opel Rekords, then Rambler cars necessary to do so became quite challenging. Like many of his generation, he dreamed of moving to Florida. In 1979, Rolland retired from the Post Office, found a corner lot in New Port Richey, Florida and bought an old Chevrolet bread truck to haul tools and special building materials from Wisconsin. He lived in a small camper on the lot and started building his dream home by digging the foundation by hand with a shovel. A couple of years later, with trips and time back and forth, he had, almost all single-handedly, completed a beautiful English Tudor house. It had real parquet floors, a 20’ high ceiling with 10’ of northern exposure glass in the great room, fireplace, hand-built solid cherry cabinetry and trim throughout, stained glass inserts in the kitchen, and an overbuilt, 40 degree pitched roof, bolted on. The only jobs he didn’t do were to hook up the main power and stucco the exterior. Rolland had a loving marriage with Shirley, 63 years. They would spend summers and Christmastime in Wisconsin. Family was everything to them. Shirley preceded him in death in 2014. His only sibling, Marjorie Sherriff Foster, passed away in 2017. He is survived by his three children: Christopher (wife Ann Elisabeth), Steven (wife Nancy), and Susan (husband Norbert Calnin). He has four grandchildren: Benjamin Sherriff (wife Danielle), Nathaniel Calnin (wife Lauren), Christopher Calnin (wife April) and Katie Calnin (husband Seth Engel) and six great-grandchildren. In these twilight years since 2014, Rolland was a resident of Schmitt Woodland Hills Retirement Community in Richland Center. He often expressed the sentiment, “I have a lot to be thankful for”! His family is grateful that during this time he found a wonderful friend in Peggy Rohn and express their gratitude for her kindness and devoted friendship to him. Rolland Sherriff was the handyman neighbor you like to have. He was always there to lend a hand or to fix something broken, usually out of the goodness of his heart. He was kind and more importantly, he was a man without guile. ‘The greatest generation’ has lost someone who helped define why it was called so. In memory, stories will be told about this remarkable man. Truly, he shall be missed. A private family memorial will take place but gifts in Rolland’s honor can be made to Ochooch Mountain Humane Society or Schmitt Woodland Hills.

The family of Rolland Lee Sherriff created this Life Tributes page to make it easy to share your memories.

Send flowers to the Sherriff family.