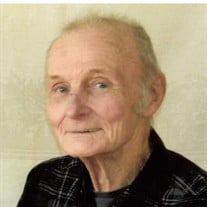 Ronald Lee Alexander, 72, of Soldiers Grove, WI, passed away peacefully on Saturday, April 23, 2022, at home with his family by his side. He was born on May 22, 1949, the son of George and Arlene (Peterson) Alexander in Richland Center, WI. He married Monica Groom on April 21, 2000, in Prairie du Chien, WI. Ronald was a man of many talents and could fix just about anything. He had a passion for classic cars, the wild west, and country music, especially fond of Dwight Yoakam. He loved coffee and coconut and was always quick to offer them to anyone who stopped by. In his spare time, you could find him visiting with friends, canning, bird watching, mowing lawn for the neighborhood, playing cards, scoping out the latest fishing hole or wrenching on cars. Ron had a passion for helping those in need and was never too busy to lend a hand. His laughter was unforgettable and he was always quick to add a joke or smart remark just to hear laughter in return. He enjoyed sharing his knowledge with those around him, especially with his grandchildren. He always said they listened better than his children ever did. Ron was a quiet man with few words but words were always full of meaning. His love for his family and friends was his greatest gift and he will be deeply missed. Survivors include his wife Monica Alexander (Groom) of Soldiers Grove, WI; 10 children, Troy Alexander of Soldiers Grove, Rachel Allred of Warren, Ohio, Kathy Alexander of Soldiers Grove, Jessica (Danny) Herfel of Plain, WI, Travis (Samantha) Alexander of La Crosse, Crystal Alexander of Soldiers Grove, Ronald Alexander II of Soldiers Grove, Michael Alexander of Viola, Zach Alexander (Paige Gander) of Soldiers Grove, David Alexander of Soldiers Grove; mother, Arlene Alexander; 11 grandchildren; siblings, Kelly (Rhoda) Alexander of Stoddard, Cheryl Otterson (John Applebee) of Soldiers Grove, Carey (Steve) Olson of Westby, Kevin Alexander of Germany; other relatives and friends. He was preceded in death by his father, George Alexander; 3 brothers, Leslie, Mike, and Bobbie Alexander. A celebration of Ronald’s life will be held on Sunday, May 1, 2022, from 10:00 AM to 1:00 PM at the new Gays Mills Community Commerce Center, 16381 Hwy 131, Gays Mills, with luncheon after. The family would like to extend a heartfelt thank you to DeAnna at St Croix Hospice for her support and exceptional care. The Clary Memorial Funeral Home in Richland Center assisted the family with arrangements. www.clarymemorialfuneralhome.com

Ronald Lee Alexander, 72, of Soldiers Grove, WI, passed away peacefully on Saturday, April 23, 2022, at home with his family by his side. He was born on May 22, 1949, the son of George and Arlene (Peterson) Alexander in Richland Center, WI.... View Obituary & Service Information

The family of Ronald Lee Alexander created this Life Tributes page to make it easy to share your memories.

Send flowers to the Alexander family.