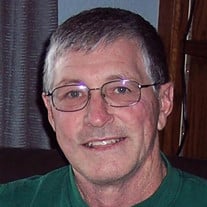 Ronald “Ron” Dobbs, age 66, of Soldiers Grove passed away on Wednesday, July 25, 2018, at the Bland Bekkedal Center for Hospice in Viroqua. Ron was born in Richland Center on October 29, 1951, the son of Gaylord and Betty (Hartley) Dobbs. Ron graduated from Richland Center High School in 1969, where he became the first wrestling state champion in school history. He married Cheryl Kaderavek on September 18, 1971 in Richland Center and together they raised three children on a farm in rural Richland County. Ron farmed his entire life and worked at Foremost Farms for 15 years. Ron & Cheryl (along with Steve & Kathy Dobbs) won Outstanding Young Farmer in 1986. Ron was inducted as an inaugural member of the Richland Center Wrestling Hall of Fame and an inaugural member of the Richland Center High School Athletic Hall of Fame. Ron bled John Deere green. He enjoyed farming, collecting tractors & memorabilia, and thoroughly enjoyed working on and maintaining all types of farm equipment. He was very proud of his children and grandchildren, and one of his favorite pastimes was taking them on tractor, bulldozer and four wheeler rides. Survivors include his wife Cheryl Dobbs of Soldiers Grove; three children, Brad (Ashley) Dobbs of Black River Falls, WI, Rachel (Tim) Hallett of Rochester, MN, Greg (Colleen) Dobbs of Fremont, WI; four grandchildren, Noah and Harper Dobbs, Mira and Lydia Hallett; two brothers, Gary Dobbs of Blue River, WI, Steve (Kathy) Dobbs of Richland Center, WI; a mother-in-law, Ann Kaderavek; brother-in-law, Dennis (Sue) Kaderavek; sister-in-law, Lori Kaderavek all of Hillsboro; nieces, nephews and many other relatives and friends. He was preceded in death by his parents and father-in-law, James Kaderavek. A Celebration of Life will be held on Wednesday, August 1, 2018 at 11:00 AM at the Clary Memorial Funeral Home with Ron Fruit officiating. Visitation will be held at the Clary Memorial Funeral Home on Wednesday, August 1, 2018 from 9:00 AM until the time of service at 11:00 AM. In Lieu of flowers, memorials can be made to the National Kidney Foundation of Wisconsin or UW Carbone Cancer Center. Online condolences can be made at www.clarymemorialfuneralhome.com

The family of Ronald Dale Dobbs created this Life Tributes page to make it easy to share your memories.