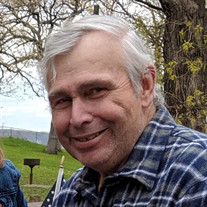 Ronald R. Otto, 71, of Richland Center passed away peacefully with his family by his side on Sunday, December 12, 2021, at Meriter Hospital in Madison due to postoperative complications. He was born on December 17, 1949, in Burlington, WI, the son of Richard and Earlene (Foss) Otto. He graduated from Burlington High School and Gateway Technical College. Ron grew up milking cows on his grandfather’s farm and later married JoAnn Robers on April 28, 1973, at St. Mary’s Catholic Church in Burlington. Ron and JoAnn moved to Richland County where they purchased a dairy farm. Ron milked cows up until his health would no longer allow it. He enjoyed his draft horses, fishing, hunting, and had an appreciation for wildlife and land conservation. Survivors include his wife JoAnn of Richland Center, WI; 4 children, Matt Otto (Alison Brooks) of Madison, WI, Becky Otto (Mike Siefkes) of Grass Lake, MI, Sarah (Scott) Siefkes of Onalaska, WI, Tim (Mary) Otto of Richland Center, WI ;4 grandchildren, Owen Otto of Madison, WI, Charlotte Siefkes of Onalaska, WI, Ben and Ellie Otto both of Richland Center, WI; 2 brothers, Gary Otto of Racine, WI, Vern (Marcia) Otto of Three Lakes, WI. He was preceded in death by his parents, Richard and Earlene Otto. Following Ron’s wishes, no funeral services will be held. A private family burial will be held at a later date. In lieu of flowers, memorials can be made to the family and will be donated to Wisconsin Public Radio and Richland Center FFA. The Clary Memorial Funeral Home assisted the family with arrangements. www.clarymemorialfuneralhome.com .

Ronald R. Otto, 71, of Richland Center passed away peacefully with his family by his side on Sunday, December 12, 2021, at Meriter Hospital in Madison due to postoperative complications. He was born on December 17, 1949, in Burlington, WI,... View Obituary & Service Information

The family of Ronald R. Otto created this Life Tributes page to make it easy to share your memories.

Send flowers to the Otto family.