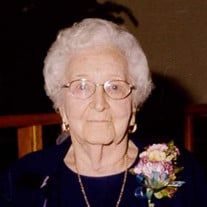 Ruby Shetler, age 100, of Richland Center died Sunday, January 31, 2016 at Pine Valley Health Care & Rehabilitation Center. She was born on August 11, 1915 in Viola, Wisconsin the daughter of William & Mary (Croninger) Johnson. On August 20, 1941 she married Glen A. Shetler and he preceded her in death on November 1986. Ruby enjoyed many things in her 100 years. She made many quilts for babies and adults, and also altered clothes for a lot of people. She baked pies, cakes, cookies for special occasions. Ruby loved to go fishing and traveled with Glen in their camper to lots of special fishing lakes in Montana and Nebraska. She helped serve lunch at Willow Valley Vacation Bible School and also served on the Thrift Shop Board, and worked at the Thrift Shop at times. In her late 40’s Ruby went to nurses training. She received her LPN license working 9 years at Chadron Nebraska Hospital as an O.B. Nurse, helping deliver 589 babies. She is survived by a son, David (Alma) Manning of Ithaca, Wisconsin; a step daughter-in-law, Pat Shetler of Mesa, Arizona; 4 grandsons Ken (Lori) Manning of Westby, Rick (Deb) Manning of Ithaca, Randy (Heidi) Manning of Ithaca, Terry (Beth) Manning of Green Bay; 13 great grandchildren, 7 great great grandchildren, 3 step grandchildren, 7 step great grandchildren, 3 step great great grandchildren; a sister, Phyllis (Bud) Meister of Plain, Wisconsin; a brother-in-law, John (Florence) Shetler of Norfolk, Nebraska; many nieces, nephews, other relatives and friends. She was preceded in death by her parents, husband Glen, stepson Lee Shetler, 5 brothers, and 2 sisters. Funeral Services will be held at 1:00 PM on Sunday, February 7, 2016 at the Clary Memorial Funeral Home in Richland Center, Wisconsin. Visitation will be held on Sunday from 11:30 am until the time of service at 1:00 PM. Private family burial will be held at a later date at the Hemingford Cemetery, Box Butte County, Nebraska. IN LIEU OF FLOWERS, memorials may be made to Pine Valley HealthCare & Rehabilitation Center. On line Condolences can be made at www.clarymemorialfuneralhome.com

The family of Ruby Irene Shetler created this Life Tributes page to make it easy to share your memories.

Send flowers to the Shetler family.