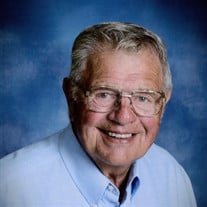 Rudolph “Rudy” M. Nigl, age 84, of Richland Center, died suddenly at home on Tuesday, December 19, 2017 with his chain saw at his feet and dog at his side. He was born on May 19, 1933 in Oshkosh, WI, the son of Rudy and Josephine (Kalous) Nigl. On April 4, 1959 he married Jeanne Marie Katalenich in East Lansing, MI. Rudy joined the United States Army as a Medic. He worked for the U.S. Forest Service for 2 years, Richland County Forester for 25 years, and as a private forester consultant from 1989 to the present. He was a member of the State and National Walnut Council, Knights of Columbus, Richland Center Lions Club and worked many years on the Richland County Park Commission. He loved his family dearly and enjoyed hunting, fishing, and training his dog. Rudy’s vocation for forestry was his avocation for forestry. Survivors include his wife Jeanne Nigl of Richland Center, WI; 4 children, Rudy (Cherie) Nigl of Stoddard, WI, Jeff (Pam) Nigl of Richland Center, WI, Teresa (Patrick) Kash of Merrimac, WI, Patrick (Lora) Nigl of Beavercreek, Ohio; daughter-in-law, Mary Jo Nigl of Richland Center, WI; 16 grandchildren, 23 great grandchildren; 2 brothers, Ronald (Nancy) Nigl of Oshkosh, WI, Ralph (Maribeth) Nigl of Oshkosh, WI; special daughter, Ledys (Derek) Updike; 3 special grandchildren, Kiara, Kaden, and Khyle Updike; other relatives and friends. He was preceded in death by his parents; son, Michael Nigl; grandson, Nicholas Nigl. A Mass of Christian Burial will be held on Saturday, December 23, 2017 at 11:00 AM at St. Mary of the Assumption Catholic Church with Msgr. Roger Scheckel officiating. Local Military Honors Unit will provide graveside rites in the church cemetery. Visitation will be held on Friday, December 22, 2017 at the Clary Memorial Funeral Home from 3:00 PM to 7:00 PM where a Rosary will be held at 2:30 PM and also on Saturday at church visitation from 10 AM until the time of service. In lieu of flowers memorials may be given to St. Mary’s school 160 W. 4th Street, Richland Center, WI 53581 608-647-2621. On line condolences can be made at www.clarymemorialfuneralhome.com

The family of Rudy M. Nigl created this Life Tributes page to make it easy to share your memories.

Send flowers to the Nigl family.