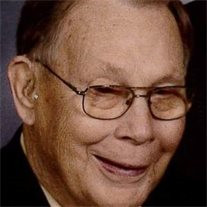 Russell Erwin Kilmer, age 85, passed away on Saturday, February 18, 2012 at his winter home in Harlingen, TX with family at his side. He was born March 23, 1926, in Wonewoc, WI to Charles and Emma (Piskey) Kilmer. On October 23, 1948 he married JoAnn Briggs in Wonewoc, Wisconsin. As a young man Russ, known to some as Fuzz, was a mechanic and truck driver. He later began working in maintenance for Wisconsin Dairies Coop (now Foremost Foods) in Reedsburg and later transferred to Richland Center as the Maintenance Supervisor. He retired in 1992 and he and JoAnn began wintering in Harlingen, TX in 1994. An avid fisherman, card player, hunter, and handyman, Russ spent the twilight years of life traveling with the woman he loved by his side. He was a kind, gentleman, soft-spoken with a wonderful sense of humor. Family and friends will miss him dearly, but know he has moved on to greater things. He is survived by his beloved wife JoAnn and his 3 children: Steve Kilmer of Richland Center, Jill Johnson of Corpus Christi, TX, and David (Tammy) Kilmer of Rice Lake, WI. He had five grandchildren: Stacy, Katherine, Madeline Kilmer of Rice Lake, WI and Melissa Sillers of Corpus Christi, TX and Daniel (Lori) Johnson of San Antonio, TX and four great-grandchildren. Funeral Services will be held on Friday, February 24, 2012 at 11:00 AM at St. John's Lutheran Church in Richland Center, Wisconsin with Pastor Ken Halstead officiating. Burial will be held in the Richland Center Cemetery. Visitation will be held on Thursday from 5:00-8:00 PM at the Clary Memorial Funeral Home in Richland Center, Wisconsin. Memorial gifts may be directed to the American Heart Association or St. John's Lutheran Church in Richland Center, WI. On line condolences, life stories, & pictures can be made at www.clarymemorialfuneralhome.com

The family of Russell "Fuzz" Kilmer created this Life Tributes page to make it easy to share your memories.

Send flowers to the Kilmer family.