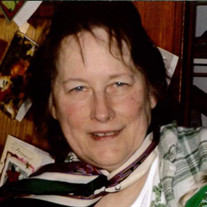 Sandra Lynne (Carlin) Beatty slipped away in comforting presence of the love of her life Allan and her children on Sunday, December 6, 2015 at their home. Sandra was born October 28, 1948 to Bartley and Veda (Hardy) Carlin in Boscobel, Wisconsin; their first child to be born in a hospital. After two sons, her father was so surprised when told they had a baby girl that he had the nurse put her bare bottom to the window to make sure. She was a proud second mother to her younger siblings, born when she was an early teen –William Carlin and Lori Schwendinger. She was very proud to give birth to Scott, Lisa, and James. Later after marriage to Allan Beatty, she was fortunate to adopt Jolene, Jeffrey, and Julie. Her first and second lasting interest besides her family was babies and the elderly, but nothing topped the love her husband and children and making a home for them. She admits to making many mistakes in her life but did the best she knew how. When you see a baby, smile as a gift to her. She leaves her loving Allan, children, grandchildren, dog Sweetie and Special Rachel Rose. Survivors include her husband Allan Beatty; 6 children, Scott (Tina) Phetteplace, James (Tiffany) Phetteplace, Lisa (Tina) McAdams, Jolene (Tim) Inman, Jeff Beatty, Julie Beatty; 10 grandchildren; a sister, Lori (Bill) Schwendinger; a brother, Richard (Bonnie) Carlin; a sister-in-law, Judy Carlin. She was preceded in death by her parents; 2 brothers, DuWayne Carlin and William Carlin. A Celebration of Sandra’s Life will be held from 1:00 PM until 4:00 PM on Saturday, December 12, 2015 at the Nazarene Out Reach Center, 391 S. Main Street, Richland Center, WI 53581. In LIEU of FLOWERS, memorials may be given to G.R.A.C.E. or Passages.

Sandra Lynne (Carlin) Beatty slipped away in comforting presence of the love of her life Allan and her children on Sunday, December 6, 2015 at their home. Sandra was born October 28, 1948 to Bartley and Veda (Hardy) Carlin in Boscobel, Wisconsin;... View Obituary & Service Information

The family of Sandra Lynne Beatty created this Life Tributes page to make it easy to share your memories.

Send flowers to the Beatty family.