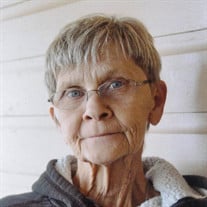 Sharon Fenton, age 72, of Richland Center died Monday, December 31, 2018, at home. She was born in Chicago Heights, Illinois on March 1, 1946, the daughter of Robert & Josephine (Stasko) Nicholson. Sharon married Patrick “Pat” C. Fenton on June 12, 1965 in St. Anne, Illinois. From 1965-1973 they raised cattle & hogs in St. Anne. They moved to Richland Center, Wisconsin in 1973. Together they operated a dairy farm from 1973-1986. Then from 1986-1995 they raised beef and dairy veal calves. In 1997 they quit farming and bought apartments and buildings and in 2009 purchased storage buildings. Sharon volunteered at St. Mary’s school and served as a member of the PCCW. She worked for over 29 years at Doudna School food service and in the kitchen at Schmitt Woodland Hills. Her hobbies include: flower gardening, knitting, word finds, and adult coloring books. She loved playing games with her grandchildren – Scrabble, Yahtzee, Golf and Uno. She enjoyed the annual family fishing trips to Chetek and having everyone home for the holidays. Survivors include: 2 children Mary (Kelly) Stowell of Richland Center and Mark Fenton (special friend Nicole Erdmann) of Richland Center; 6 grandchildren Bailey (Collin) McCullock, Spencer Stowell, Campbell Stowell, Ben Stowell, Mason Fenton and Megann Fenton all of Richland Center or in college; 2 sisters, Gloria Rigney of Gilbert, AZ, Judy (Don) Abrassart of St. Anne, IL; other relatives and friends. She is preceded in death by her parents; husband; sister, Geraldine Zirkle and brother, Robert Nicholson. A Mass of Christian burial will be held on Friday, January 4, 2019 at 11:00 AM at St. Mary of the Assumption Catholic Church in Richland Center with Monsignor Roger Scheckel officiating. Burial will be held in the Dayton Corners Cemetery. Visitation will be held on Thursday, January 3, 2019, from 5:00 PM to 8:00 PM with a rosary at 8:00 PM at the Clary Memorial Funeral Home in Richland Center and also at church on Friday from 10:00 AM until the time of service. Memorials can be made to St. Mary of the Assumption Catholic Church.

The family of Sharon Ann Fenton created this Life Tributes page to make it easy to share your memories.

Send flowers to the Fenton family.