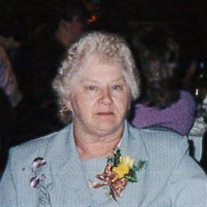 Sharon Lee Riley, age 78, of Muscoda, died Thursday, November 17, 2016 at Greenway Manor Nursing Home in Spring Green. She was born on June 13, 1938 the daughter of George Henry & Mildred Frances (Lettman) Graham. On December 31, 1955 she married William “Bill” Riley at St Phillip’s Catholic Church in Highland. Sharon loved gardening and being outside. She enjoyed baking, crocheting, reading, doing word puzzles and spending time with family. She made several trips to Las Vegas with bill which she enjoyed very much. She worked at Advance Transformers in Boscobel for many years and made many friends there. Survivors include her husband, Bill Riley of Muscoda; 4 children, Cindy (Bob) Maly, George Riley, Brian Riley, Amy Riley (Chris Jenson), all of Muscoda, WI; 4 grandchildren, Chelsea (Jeff) Cox of Muscoda, Riley Jenson (Sydney Ferrel) of Blue River, Jason (Yolanda) Maly of Muscoda, Joel Maly of Westby; 4 great grandchildren; 2 sisters, Shirley Hometh of Muscoda, Mary Bowen of Tuscola, Illinois; a brother, David (Sue) Cudney of Muscoda; other relatives and friends. She was preceded in death by her parents; a son, William Riley Jr; 2 brothers, George Graham and Michael Cudney. A special thanks to Dr. Balink and the wonderful staff at Greenway Manor for their loving care during these past few months. Thanks to Gunderson Hospital/clinics and UW Hospital for the excellent care given during her visits and hospitalizations. Memorial Services will be held at a later date. The Clary Memorial Funeral Home in Richland Center assisted the family with arrangements. On line condolences can be made at www.clarymemorialfuneralhome.com

The family of Sharon Lee Riley created this Life Tributes page to make it easy to share your memories.

Send flowers to the Riley family.