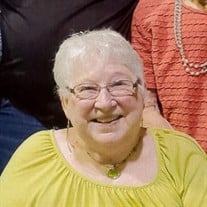 Sharon Marie Schaper, Age 77, of Richland Center, WI passed away on December 7, 2018 after a brief hospitalization at Richland Hospital. She was born on October 18, 1941 to Wallace Bradley Sr. and Harriet (Stittleburg) Bradley at the Reedsburg Hospital in Reedsburg, WI. She was raised on a farm in the Wonewoc area. She married her high school sweetheart, Bernie Schaper on August 23, 1958 at St. Jerome's Church in Wonewoc, WI. Their marriage was blessed with three daughters. We are blessed that her passing was most peaceful and her medical wishes were able to be honored. She faced every medical issue with a positive attitude like no other and would be quick to tell anyone that it was OK and to never feel sorry for her. As sad as we are to have to let her leave us here on this Earth, there are so many beloved family and friends greeting her with open arms now, just waiting for the day when they would see her again. Our parents have always loved their life and friends here in Richland Center. Mom loved visiting with so many people around town and on Facebook and she considered so many friends to be like family. Her marathon trips about town with Dad were a humorous topic, as she would run into so many people that she knew that a “quick” errand for an appointment or groceries could easily turn into a visit that would last hours. She moved with her husband, Bernie, during his job changes. She worked at Mercury Industries, MPC, Kentucky Fried Chicken, and Burnstads here in Richland Center and enjoyed volunteering at the Richland Hospital. Her greatest joys were her family, fishing up north, collecting cookbooks and trying new recipes. She is survived by her beloved husband of 60 years, Bernie Schaper, their three daughters, Victoria (Dean) Baumgarten of Loganville, WI, Kathleen (Craig) Witt of Wilton WI, and Kimberly (Todd) Coppernoll of Richland Center, WI, her brother Wallace (Florence) Bradley Jr. of LaValle, WI, two sisters LaVonne Schyvinch of Reedsburg, WI and Jackie (Jim) Peterson of Cazenovia, WI, her brother-in-law, Carl (Dee) Schaper of Fort Atkinson, WI, and two sisters-in-law, Doris (Jim) Owen of Lacey Springs, AL, and Sue McGeough of Brookfield, WI. She is further survived by eight grandchildren, Jenny (John) Albers, Joel (Tiffany) Baumgarten, Jessica (Aaron) Bauer, Ryan (Ruth) Witt, Eric (Lisa) Witt, Darin Gease, Brent Coppernoll and Jon Coppernoll, ten great grandchildren, Ephraim Jacob & Thomas Peter Albers, Benjamin Owen & Emma Anne Baumgarten, Olive Branch & Milo Stanley Dean Bauer, Carsen Craig & Austin William Witt, and Isabella Kathleen & Melanie Rose Witt. She was preceded in death by her parents Wallace Bradley Sr. & Harriet Bradley Grosskrueger, father-in-law Herman Schaper and mother-in-law Clara Schaper Jacobs, brothers-in-law Andrew Schyvinch and James McGeough. A celebration of her life will be held on Sunday, December 23, 2018, at Clary Memorial Funeral Home, Richland Center, WI with visitation at 1:00 PM with service to follow at 3:00 PM.

Sharon Marie Schaper, Age 77, of Richland Center, WI passed away on December 7, 2018 after a brief hospitalization at Richland Hospital. She was born on October 18, 1941 to Wallace Bradley Sr. and Harriet (Stittleburg) Bradley at the Reedsburg... View Obituary & Service Information

The family of Sharon Marie Schaper created this Life Tributes page to make it easy to share your memories.

Send flowers to the Schaper family.