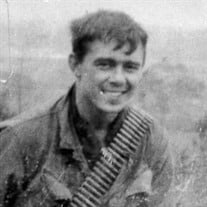 Terry G. Tanner September 19, 1948 – June 26, 2020 Terry G. Tanner (Ty) passed away Friday, June 26, 2020, at Agrace HospiceCare in Madison, WI surrounded by his family. He was the second of five children born to William and Maxine Anderson Tanner. He was raised in Richland Center, attending his first two years of high school there before moving to Basswood and attending the last two years of high school in Muscoda where he was later inducted into the Riverdale Wrestling Hall of Fame. After graduating in 1966, he attended UW-La Crosse for a year and a half. At that time, due to a lack of funds, he was drafted into the Army, leaving for induction in Milwaukee on Valentine’s Day, 1968. He received basic training at Fort Campbell, KY and advanced infantry training at Fort Polk, LA. He was sent to Vietnam in July of 1968 where he spent the next 366 days. He was the “gunner” which means he carried the M60 machine gun for his unit. He returned home and was stationed in Colorado Springs. He returned to Richland County to marry his high school sweetheart, Sharon Melby, on September 21, 1969. They lived in Colorado Springs until his discharge in January 1970. At that time they moved to LaCrosse where Ty finished his general studies and then enrolled in the UW-Madison School of Pharmacy program. He graduated in 1974 and worked at a pharmacy in Reedsburg. Their first child, Luke, was born in 1976. In 1978, Ty and Sharon purchased the Nalepinski store in Muscoda and established the Tanner Pharmacy. Their two daughters, Emily and Hannah were born while they occupied the living quarters above the store. Ty felt a sense of pride in bringing back a pharmacy to the village of Muscoda. They were in business and in the Muscoda Chamber of Commerce for 25 years. Ty also served his community as a member of the Lions Club, the American Legion and a volunteer for the Muscoda Fire Department. Ty’s interests were many and varied. He put up a windmill, raised sheep, had a mule and beehives. He was a very talented chainsaw woodcarver. He donated many of his creations to the community. His works are cherished by those lucky enough to have received one. After his family, he loved the outdoors in any weather or setting, but perhaps the river was his favorite. He was a serious fisherman who fished hard. He shared his knowledge of the water and the woods with his children and anyone who needed it. His interests led him to acquire a Hovercraft, even performing a rescue with it. Ty was a gentle soul who spoke with a low, soothing tone. It had a very calming effect on those listing to him. Ty was honorably discharged in 1970, but the war did not end for him. He carried the images and sounds of Vietnam with him for the rest of his life. Agent Orange contributed to his health problems. In September of 2019 he went on the Honor Flight to Washington, D.C., accompanied by his daughter, Emily. It was a very full, tiring day but meant so much to him. The welcome home he and his fellow veterans received was long overdue. Ty received many medals and commendations, the Combat Infantry Badge, Purple Heart and Soldiers Medal for Heroism to name a few. He rarely spoke of them or his experiences in Vietnam. He is survived by his wife Sharon, son Luke (wife Angela, granddaughters Freya and Finlee, grandson Clay), daughters Emily (fiancé John), Hannah (fiancé Brian) and sister Cindy Knoble. He is further survived by many sisters-in-law, brothers-in-law, nieces and nephews. Ty was preceded in death by his parents, brothers Robert and Richard and sister Sandy Bailey. Toward the end of his life, Ty wrote the following: “People who knew me, Well I finally took the trip. I won’t cry and you shouldn’t either. My life was great. I spent fifty years of my life with Sharon nee Melby raising three children Luke, Emily and Hannah who always made me proud. “ Due to COVID-19 a Celebration of Life will be held at the Tanner home in Gotham at a later date. The Clary Memorial Funeral Home in Richland Center assisted the family with arrangements. www.clarymemorialfuneralhome.com

The family of Terry "Ty" G. Tanner created this Life Tributes page to make it easy to share your memories.

Send flowers to the Tanner family.