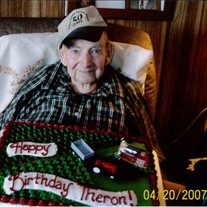 Theron C. Helt, age 84, of rural Viola, died Monday, September 5, 2016 at Vernon Memorial Hospital in Viroqua. On April 20, 1932 he was born the son of Herman and Adalee (Ward) Helt. He grew up in the Ash Ridge area and attended different grade schools in that area. Theron graduated from Viola High School in 1950. He and his family farmed on several farms. Theron hauled milk and worked at the Guy Friday Cheese Factory at Ash Ridge. He worked as the ring man at many farm sales for over 40 years, assisting many different auctioneers. He hauled livestock, worked the sale ring and clerked the auctions for Matthes Farms since 1963, retiring in the fall of 2015. During that time, he bought and sold dairy cattle for Matthes Farm and developed many good friends and customers among the Amish. All of his life Theron was a fun loving guy. In his hey-day he loved to dance. He loved to torment the women so they would bake him a pie or cake. He did rain dances when it was dry, predicted the winter by the caterpillar’s coats and generally, had an opinion on any subject. Survivors include his niece, Connie (Ron) Riedel of Reedsburg; 2 nephews, Bill (Sandy) Helt of Hillpoint, Brian (Denise) Helt of Luxemburg; 2 cousins, Eva Shilling of Richland Center, Sharon (Mike) Frye of Elroy; special thanks to his care givers, Dawn Clark, T.J. Clark, and Chantel Thorgerson. He was preceded in death by his parents; brothers, Francis (Vera) Helt, Richard (Ellie) Helt; and a sister, Doris Helt. Funeral Services will be held at 2:00 P.M. on Thursday, September 8, 2016 at the Viola United Methodist Church. Burial will be held in the Viola Cemetery. Friends may call on Thursday at the Viola United Methodist Church from 1:00 PM until the time of services at 2:00 PM. On line condolences can be made at www.clarymemorialfuneralhome.com

Theron C. Helt, age 84, of rural Viola, died Monday, September 5, 2016 at Vernon Memorial Hospital in Viroqua. On April 20, 1932 he was born the son of Herman and Adalee (Ward) Helt. He grew up in the Ash Ridge area and attended different... View Obituary & Service Information

The family of Theron C. Helt created this Life Tributes page to make it easy to share your memories.

Send flowers to the Helt family.