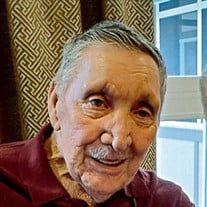 Thomas H. Millner, age 83, of Richland Center died Wednesday, March 4, 2020, at Schmitt Woodland Hills in Richland Center, WI, with his family by his side. He was born on October 29, 1936, in McHenry County, IL, the son of Claude Doc and Mable (Wagner) Millner. On May 14, 1960 he married Dorothy Margaret Goad in Harvard, Illinois. Tom was a member of the Muscoda American Legion Post 0085 for 42 years. Tom served 2 years in the Army stationed at Fort Hood, Fort Bliss and Seoul, Korea. He was an MP and a Dog Handler making a lifelong best friend, Chuck Walker, during his time in the service. After enlistment, Tom was a hard worker doing road and building construction but was passionate about wanting to start a family dairy farm. In 1972, he and Dorothy found the perfect place in Basswood (Muscoda), WI, to move their family and begin their adventure of farming! Tom and Dorothy ran the farm for 15 years until their son, David, joined a partnership with them and shared in the responsibility of running the farm. Over the years, they milked dairy cows, raised beef cattle and harvested crops. Tom was a great teacher to his children sharing with them his love for animals and respect for nature. With his help, they learned how to work on cars and farm machinery, ride horses, fish, hunt and love. One of Tom’s greatest memories, was a road trip with dear friends, Chuck and Beth Ware, to visit Tom’s cousin in Arkansas. While there, Chuck, Tom and Johnny went fishing while the ladies went to the hot springs. When trying to land the biggest fish Johnny had every caught, it came off the hook, and of course, Johnny told everybody that his cousin came all the way from WI just to let his fish go! Survivors include his wife of almost 60 years, Dorothy Millner, of Richland Center, WI; 3 children, Steven Millner of Monroe, WI, David (Betty) Millner of Reedsburg, WI, Doreen (SSGT David) Zamastil of Madison, WI; a grandchild, Mitchell Millner of Monroe, WI; step grandchildren, Estefania and Paola; 2 brothers, Duane (Linda) Millner of Capron, IL, James (friend Kris) Millner of Blue River, WI; 2 sisters, Barbara Boettcher (friend Ted) of Harvard, IL, Letha Roesslein of Hebron, IL; special aunt, Carol McCormick of Richland Center, WI; nieces, nephews, and in-laws that loved him very much, as well as other relatives, friends and beloved dog Lola. He was preceded in death by his parents; parent-in-laws, Victor and Viola Goad; a brother, Richard Millner; 2 brothers-in-law, Raymond Boettcher, Alfred Roesslein; a sister-in-law, Joyce Fehrmann; nephews, Derrick Thomas Millner, Ricky Millner; niece, Tasha Roesslein. Funeral Services will be held on Sunday, March 8, 2020, at 12:30 PM at the Clary Memorial Funeral Home in Richland Center, WI with Pastor Cathy Van Landuyt officiating. Friends may call on Sunday, March 8, 2020, at the Clary Memorial Funeral Home from 10:00 AM until the time of services at 12:30 PM. The Muscoda American Legion Post 0085 will provide military honors at the funeral home. Memorials can be made to Schmitt Woodland Hills in Richland Center. www.clarymemorialfuneralhome.com

Thomas H. Millner, age 83, of Richland Center died Wednesday, March 4, 2020, at Schmitt Woodland Hills in Richland Center, WI, with his family by his side. He was born on October 29, 1936, in McHenry County, IL, the son of Claude Doc and Mable... View Obituary & Service Information

The family of Thomas Herman Millner created this Life Tributes page to make it easy to share your memories.

Send flowers to the Millner family.