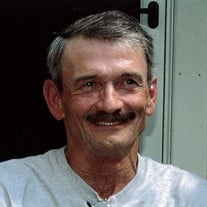 Timothy Joseph McGlynn, 72, of Richland Center died Monday, January 27, 2020, at home. Tim was born December 23, 1947 to Tom & Lauretta “Dimp” (Durst) McGlynn. He was the second oldest of nine siblings, having grown up on a farm outside of Cazenovia, Wisconsin. He attended school at West Branch, St. Anthony’s and graduated from Weston High School in 1967. Tim enlisted in the Army in 1967 and served three years including a tour in Vietnam with the 101st Airborne. After returning home, he wed Sharlene Kay (Maassen) McGlynn in November 1969. They were blessed with their two boys: Chad McGlynn in 1971 followed by Ryan in 1979. For many years Tim ran a shop in Rockbridge, where he used his many talents to repair and maintain farm machinery. He had close ties with farming community and was able to purchase his own farm in 1997 near Boaz and built a house from scratch with the help of his sons and family. He logged the lumber from his brother’s farm, bought and repurposed equipment and built the home from the ground up. He instilled and taught his sons along the way his vast knowledge and expertise of carpentry and mechanical skills. Always having a love for farming, he raised cattle and tended to planting crops and cutting firewood. In later years he worked as maintenance man at Hilltop Dairy and Schrieber Dairy. Tim was one of a kind, always working and busy. He is survived by his family that dearly loves him. His wife, Sharlene McGlynn; 2 sons, Chad (Shelly) McGlynn, Ryan (Rachel) McGlynn; his mother, Lauretta “Dimp” McGlynn; grandchildren: Chelsea Pulvermacher, Katie Klang, Nathan, Alisha, Olive, Violet and Hazel McGlynn. He always adored his grandchildren and became great grandfather to Collin Klang and Rylin Blaha. In addition honorary grandchildren: Amber, Alexis, Connor and Alea Klingaman. His surviving siblings: Tom (Winnie) McGlynn, Tad (Sue) McGlynn, Jerry (Janet) McGlynn, Jay McGlynn, Jim (Lisa) McGlynn, Pat (Monica) McGlynn; in addition numerous extended family and friends. He was preceded in death by his father Tom McGlynn Sr., brother, Joseph McGlynn, brother in law Paul Henry; and a sister, Molly Henry. He will be greatly missed by many. We are more than grateful for the hospice care and their support during this journey. Family and friends are inviting you to partake in the joyful, “Celebration of Life” on Saturday, February 1, 2020, at the Clary Memorial Funeral Home in Richland Center from 1:00 PM – 4:00 PM with short service at 4:00 PM and luncheon to follow. Please join us by sharing a joyful story or remembrance of Tim’s Life. On line condolences can be made at www.clarymemorialfuneralhome.com

The family of Timothy Joseph McGlynn created this Life Tributes page to make it easy to share your memories.

Send flowers to the McGlynn family.