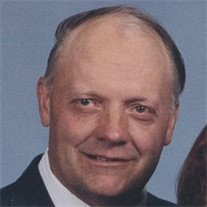 Vincent M. Ramsden, age 77, passed away Friday, Aug. 29, 2014 at his rural Highland home, after a one month illness due to cancer, with his wife & family by his side. He was born at the family farm home on October 23, 1936, to Willard & Mildred (Hagenston) Ramsden. He married Carol Mellum on October 7, 1962 at the Otter Creek Lutheran Church, rural Highland. Together they raised four children & opened their home to at least 40 foster children. Vince attended Highland High School, class of 1954, as Valedictorian & attended UW Farm Short Course. He became the proud owner of Forest View Farms, Inc. with his wife Carol & Children. He truly loved working the land, loved all of nature, and animals. He helped on the farm until three weeks before his death. He served on the Highland School Board for 15 years, 12 of those years as president. He was a man of strong faith, principles & integrity and strived to always live by them. He attended the United Methodist Church since an infant. He held every office of the church over the years, teaching and preaching at many churches in Wisconsin. Also, he was a wonderful singer since a child and sang for hundreds of funerals and occasions. He lived a great life of fullness and spirituality. Since 1987 he was involved with United Methodist "Volunteers In Mission", traveling and leading to 104 disaster and needy areas throughout Wisconsin, United States and Canada. For nine years he was Coordinator Chair and held the office of Vice Chair and Travel Coordinator until his death. He planned hundreds of mission trips to needy areas and this was his special calling. His VIM family meant so very much to him. He named the VIM slogan "Serving God By Serving Others". Vince had a great sense of humor and was "Cousin Vinny" in hundreds of his comedy routines throughout Wisconsin and many other states. Vince is survived by his loving wife, Carol (Mellum) Ramsden of rural Highland; children, Vaughn (Barbara) Ramsden of Spring Green, Carlene Ramsden of Highland, Craig Ramsden of Highland, Victoria (Brian) Shanley of Onalaska, Corrina (Casey) Zoha long lasting foster daughter of Montfort, WI; his eight grandchildren, Kyle & Kaleb Ramsden, Brenna, Kelly & Katie Ramsden, Peyton Shanley, Alexa & Taylor Zoha; 5 brothers, Kenneth (Alice) Ramsden of Richland Center, Ronald Ramsden of Verona, Paul (Kathy) Ramsden of Barneveld, Dean (Jane) Ramsden of Kansas City, Mo., Gary Ramsden of Madison. Several nieces, nephews, other relatives and many friends. He was preceded in death by his parents, Willard & Mildred Ramsden; two brothers, Warren and Alan Ramsden; one sister, Geraldine Brander. Funeral Services will be held on Monday, September 15, 2014 at 1:00 PM at the Clary Memorial Funeral Home in Richland Center. Pastor Richard Hutchison will officiate with burial in the Avoca Cemetery. Visitation will be held on Sunday, September 14, 2014 from 4:00 PM to 8:00 PM at the Clary Memorial Funeral Home and also on Monday from 11:00 AM until the time of service at 1:00 PM. On line condolences can be made at www.clarymemorialfuneralhome.com In lieu of flowers memorials may be given to the families favorite charities. A special thanks to Dr. Mark Hughes and the Dodgeville Upland Hills Hospice for their help and support during his final days. "We Love You More"

Vincent M. Ramsden, age 77, passed away Friday, Aug. 29, 2014 at his rural Highland home, after a one month illness due to cancer, with his wife & family by his side. He was born at the family farm home on October 23, 1936, to Willard & Mildred... View Obituary & Service Information

The family of Vincent Ramsden created this Life Tributes page to make it easy to share your memories.

Send flowers to the Ramsden family.