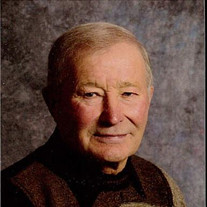 Virgil D. Keller, 80, of Muscoda, Wisconsin died Saturday, June 25, 2016 at The Richland Hospital. Virgil was born December 14, 1935 to Edwin and Ada (Emshoff) Keller, the youngest of six children. He grew up in Ash Creek and graduated from Richland Center High School in 1953. On November 27, 1954, he married Linda Chitwood. Together, the two farmed for 61 years, the last 56 of those years in Richland County’s Eagle Township. Virgil had a passion for registered Holsteins. He was a proud 4-H parent and enjoyed the many family friendships that he and Linda developed through their work as Richland County dairy producers. In 1985, the couple hosted one of Richland County’s first annual dairy breakfasts. He especially enjoyed hosting international visitors to the farm. Virgil and Linda sold their milking herd in 1997. In the years that followed, he enjoyed woodworking and teaching his grandchildren how to create wooden artwork of their own. His grandchildren and great-grandchildren were his pride and joy. Survivors include his wife of 61 years, Linda; four children, Vicki (Jerry) Stadele of Muscoda, Steve (Janet) Keller of Oregon, WI, Shelly (Dwight) Mayer of Slinger, and Stacy (Jerry) Kleist of Richland Center; nine grandchildren and eight great-grandchildren: Angie (Mike) Lickel and their children Emma and Logan of Barneveld, Niki (Brian) Bailey and their children Will and Owen of Spring Green, Dana (Jeremy) Wilson and their children Wren and Ryder of Richland Center, and Kyla (Kyle) Montgomery and their children Lane and Raelynn of Richland Center; Devin, Dylan, and Cassie Mayer of Slinger; and Sterling and Cora Kleist of Richland Center; sister Madalene McCauley of Richland Center; sister-in-law Jena Keller of Richland Center; many nieces and nephews; cousins; other relatives and friends, including special friends Ed and Sharon Spencer of Reedsburg. Virgil was preceded in death by his parents, Edwin and Ada Keller; brothers, Lester and wife Melva Keller, Melvin and wife Loretta Keller, and Theron Keller; sister, Freda and husband Richard Jones; and brother-in-law Roland McCauley. Services will be held Wednesday, July 6, 2016 at 11:30 a.m. at the Clary Memorial Funeral Home of Richland Center. Pastor Randy Sanders will officiate. Visitation will be held at the Clary Memorial Funeral Home on Tuesday, July 5th from 4-7 p.m. and Wednesday, July 6th from 10:30 a.m. until the time of the services at 11:30 a.m. Burial will follow in the Richland Center Cemetery. Memorials can be made to the Muscoda Rescue Squad or G.R.A.C.E.

Virgil D. Keller, 80, of Muscoda, Wisconsin died Saturday, June 25, 2016 at The Richland Hospital. Virgil was born December 14, 1935 to Edwin and Ada (Emshoff) Keller, the youngest of six children. He grew up in Ash Creek and graduated from... View Obituary & Service Information

The family of Virgil Dennis Keller created this Life Tributes page to make it easy to share your memories.

Send flowers to the Keller family.