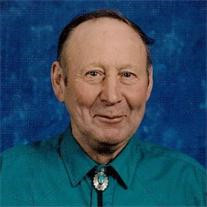 Wayne G. Anderson, age 87, of rural Richland Center died Friday, September 16, 2011 at his home in Ithaca Township. Per Wayne's request his body was donated to the School of Medicine & Public Health at the University of Wisconsin. Wayne was... View Obituary & Service Information

The family of Wayne Anderson created this Life Tributes page to make it easy to share your memories.