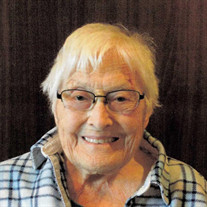 Not sure what to send?

Wilda L. “Wid” Cornell, 96, of rural Hillsboro, passed away peacefully on Thursday, April 28, 2022, at Pine Valley Community Village in Richland Center. She was born on October 19, 1925, at the home of her parents near West Lima, the daughter of Jacob E. and Josie E. (Griffin) Morgan. “Wid” attended school at the Cook School and the West Lima High School, graduating in 1943. On February 1, 1943, she married LeRoy Cornell. They resided at various locations in West Lima until the departure of LeRoy in June of 1944 to the Great Lakes Naval Center and deployment to the Pacific Theatre, at which time “Wid” and son, Terry, moved to the “home place”, that being her parent’s farmstead. LeRoy was discharged in February 1946 and began farming with the Morgan’s. “Wid” has lived here at the “home place” all but for the short time in West Lima. “Wid” became a member of the West Lima Church of Christ in 1958 and has remained faithful, participating in, volunteering for and performing numerous activities for her Christian Family. She entered the Pine Valley Assisted Living in November of 2021 after having fallen and needed additional care. Survivors include 4 sons, Terry (Dorie) Cornell of Richland Center, Allen (Sally) Cornell of West Lima, Kim S. (Rosemary) of West Lima, Robin (Lisa) Cornell of Amery; 10 grandchildren; 22 great grandchildren; 3 great great grandchildren; other relatives and friends. She was preceded in death by her parents; husband; a brother, Wayne; 2 sisters, Madge Kaukl, Bonnie Parker; and a great grandson, Tristen Cornell. A celebration of Wilda’s life will be held on Saturday, May 28th, 2022 at 11:00 AM West Lima Church of Christ with Pastor Allen Cornell officiating. Visitation will be held on Saturday, May 28, 2022, at West Lima Church from 10:00 AM until the time of services. Burial will be held in the Vernon Cemetery. The Clary Memorial Funeral Home in Richland Center is assisting the family with arrangements. www.clarymemorialfuneralhome.com .

The family of Wilda "Wid" L. Cornell created this Life Tributes page to make it easy to share your memories.