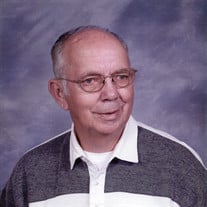 William “Bill” L. Myhre Sr., age 77, of Edgerton, formerly of Viroqua, died Tuesday, January 26, 2016 at his home in Edgerton. He was born May 26, 1938 in Viroqua, WI, the son of Oscar & Edna (Sidie) Myhre. Bill dairy farmed near Edgerton for 45 years. He enjoyed playing cards, going for his daily walk, and an avid bowler. He is survived by 4 children, Bill (Jill) Myhre Jr. of Edgerton, Chris Myhre (friend Dawn Anderson) of Edgar, Darcy Hackel of Madison, Mike Myhre of Janesville; 9 grandchildren, Kyle (Lynn) Myhre of Madison, Craig Myhre of Edgerton, Sara Myhre of Edgerton, Nathan Myhre of Edgar, Zoe, Devon, and Caden Hackel all of Madison, Jenna Myhre (fiancé Riley McLaughlin) of Janesville, Carly Myhre of Janesville; a great granddaughter, Natalie Myhre of Madison; 3 siblings, Lorraine Coleman of Lone Rock, Robert (Rosemary) Myhre of Beloit, Sharron L. Burgess of Spring Green; other relatives and friends. He was preceded in death by his parents and his wife of 30 plus years Sally Myhre. Visitation will be held on Friday, January 29, 2016 from 5:00 PM to 7:00 PM at the Ehlert Funeral Home in Edgerton. Funeral Services will be held at Noon on Saturday, January 30, 2016 at the Clary Memorial Funeral Home in Richland Center with a visitation starting at 11:00 AM. Burial will be held in the Lone Rock Cemetery. IN LIEU OF FLOWERS, memorials can be given to Central Lutheran Church of Edgerton. On line condolences can be made at www.clarymemorialfuneralhome.com

The family of William L. Myhre Sr. created this Life Tributes page to make it easy to share your memories.

Send flowers to the Myhre family.