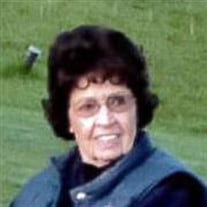 Winnifred “Winnie” Lucille Weitzel, age 93, formerly of Bear Valley, died Friday, September 18, 2015 at her son's home in North Freedom. She was born on April 28, 1922 the daughter of Orville and Sylvia (Martin) Bailey. She married Harold Lewis and they were married a short time before he preceded her in death in a truck accident. She later married Lawrence “Larry” Weitzel on April, 22, 1950. Winnie worked at the Ithaca school for many years as a librarian and teacher's aide as well as taking the census every year. She worked until her mid-seventies because she enjoyed all of the children who touched her heart throughout the years there. This turned into many generations of families that she was able to watch grow. Winnie was an avid Packer and Badger fan and enjoyed going to the local softball and baseball games at Kaul Park. She bowled for many years at the Richland Center Lanes and won many trophies and plaques and always cherished the time spent with her teammates. Larry preceded her in death in October, 1999 and she spend the next fifteen years on the farm with her faithful companion “Penny” her jack russell terrier. She loved working out in her lawn and keeping up her flower gardens and watching the deer in the fields as well as counting the cattle that came down into the lower pasture. She looked forward to deer hunting season every year as the DeLapp family came every year to hunt and she looked upon them as an extension of her own family. She also spent time doting on her granddaughter Ashlee who was her one and only grandchild and the sunshine of her life. Survivors include her sons, Tony (Renee) Weitzel of North Freedom, WI and Jim Lewis of LaCrosse, WI; a granddaughter Ashlee Weitzel of North Freedom, WI; 2 sisters-in-law, Rachel Bailey of Muscoda, WI and Betty Burt of Green Bay, WI as well as several nieces, nephews, other relatives and friends. Winnifred was preceded in death by her parents; husbands Harold Lewis and Larry Weitzel, 2 sisters, Muriel and Pauline; 2 brothers, Gurvase and Gordon. Celebration of Life Services will be held on Wednesday, September 23, 2015 at 11:00 a.m. at the Clary Memorial Funeral Home in Richland Center. Visitation will be held on Tuesday, September 22, 2015 from 4:00-7:00 p.m. and also on Wednesday from 10:00 a.m. until the time of services. On line condolences can be made at www.clarymemorialfuneralhome.com

The family of Winnifred "Winnie" Lucille Weitzel created this Life Tributes page to make it easy to share your memories.

Send flowers to the Weitzel family.